Since the concertina entered my life, it has influenced my path in many ways. Bringing me along on a kind of a journey only something so unique could do. Being the reason that I came to Europe in the first place, I studied Music and then Fine Art in The Netherlands before I moved to France. Once in France I studied Music at a private accordion school and from there I began my career as a musician, recording three albums of Classical music on the concertina. The concertina brought me to Germany where I lived several years.
Over the years I had been brought to the UK several times on the wings of the Concertina between 2002 and 2007. I have now settled and live in Wales near Aberystwyth.
I have lived in Europe for over twenty years and more than anything have been a student of life. 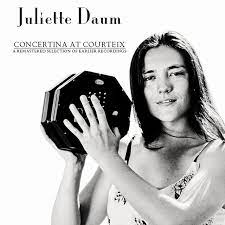 Listen to Concertina at Courteix on Spotify!